Public Gardens can be wonderful additions to communities by providing beauty and serving as demonstration gardens featuring desirable plants or gardening ideas.  However, when they are not maintained they detract from the community and give a negative impression of particular plants.  The second of these options is what was happening to the the Prague Rose Garden Club.  I'm sure that the original members of the Prague Rose Garden Club could never have imagined that the garden would fall into such a state of neglect.  The great era of civic organizations and gardening clubs seems to be coming to an end.  Just look at the struggle of the American Rose Society to maintain its membership.  It only seems logical when people can learn more about roses in an afternoon of Internet surfing than they would gain in a year's participation the the ARS.  This is not meant to be a criticism of the ARS (I have been a member off and on several times over the past 20 years) just a description of our social reality.

My own involvement with the Prague Rose Garden began as an act of gorilla gardening.  We moved to Prague just two and a half years ago.  After the first year and after I got started on my own rose garden, I decided to start taking care of one of the two end gardens (this one actually did not have any roses growing in it and the other had one hybrid tea in the center). The garden consists of three beds: two 10 foot by 8 foot small plots on each end with a roughly 40 foot by 8 foot center section. After working on this small bed for a few months, I finally got fed up with the care of the center bed.  The city mows the park but since this was a garden with a concrete border which keeps the lawn mowers out, it did not get mowed.  It had gotten so bad that the grass and weeds were over two feet tall and you could hardly see the the six Knock Out, one Double Delight, one Europeana, and one lavender hybrid tea roses in the garden.  I brought my weed eater out to knock down the grass and weeds.  While I was pulling weeds directly around the roses a curious friend stopped and took the picture you see below.  You can also see a corner of the first bed I started on in the picture. 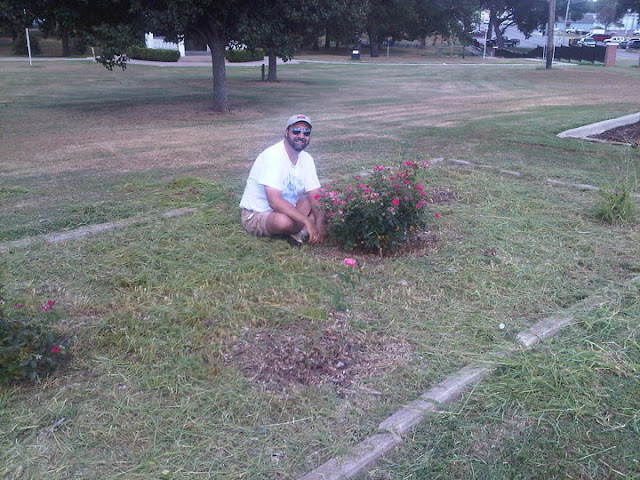 Since then, I have been spending an hour or two each week in the garden and have planted: 7 The Fairy, 3 Popcorn, 2 Graham Thomas, 2 Lavender Lassie, 1 DayDream, 1 St. Swithun, 1 Heritage, 1 Abraham Darby, 1 Twister, 2 Autumn Splendor, 1 Seattle Scentsation, 1 Reine des Viollette, 1 Precious Dream, and 1 Marti Gras.  Wow, that's twenty five rose bushes - more than I thought.  It doesn't seem like that many.  Partly because they are still very small and we did have some casualties from the summer draught and record heat.  A couple of The Fairy, 2 Gertrude Jekyll, one Vi's Violet, and a Tattooed Lady were lost this summer. 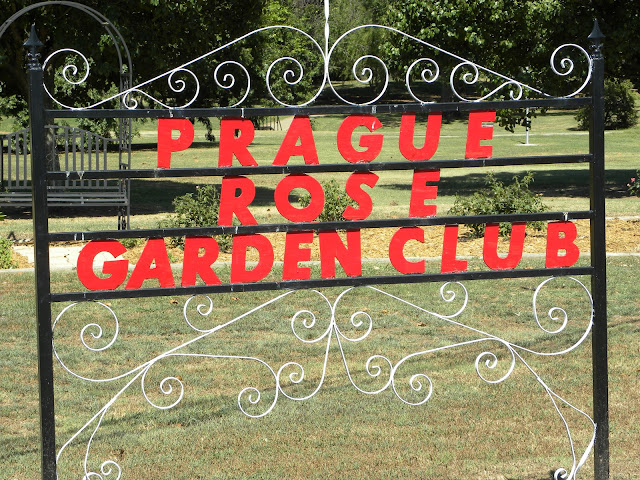 The black weed barrier that had previously been put down was removed by the High School FFA because (as so often is the case) it had grass and weeds growing both on top of and underneath it.  As I continue to add to the number of roses in the garden, I plan to install a soaker hose system for easier watering in the coming years.  While I hope that the efforts in the Prague Rose Garden will offer beauty to the park and community, I also hope that it will inspire a few more people to take up gardening with roses and maybe look beyond the most obvious selections.

The roses I have added have either been own root bands that I have bought or they have been ones that I have started from cuttings.  This means that they are still very small but that since they are own root plants they will live longer once established.  In the Spring I hope to put together a workshop on rose propagation for anyone in the area who might like to attend.

This is the first bed I began working with.  The line of  small roses in the front are The Fairy.  As you can probably tell, two of them didn't make it through the summer.  On the back are Autumn Splendor, Twister, and Seattle Scentsation.  In the middle are two very small starts of St. Swithun and Abraham Darby.
My long term hope is to get the garden strongly reestablished and then to see if we can get the Prague Rose Garden Club started again.  I know people don't join clubs like they used to.  If I'm successful then hopefully twenty years from now, someone else won't be trying to start up the garden and club again.  One other note, I often hear about rosarians who run out of space in their home gardens.  Why not expand your work into a public garden that is needing some help?  It might be at your local park or even at your church.  I think that there are probably many public spaces who could benefit from your expertise and time.
Posted by Unknown at 4:18 PM 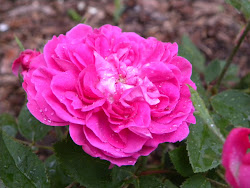 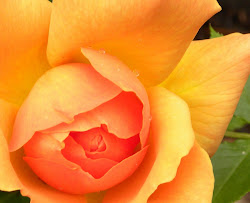 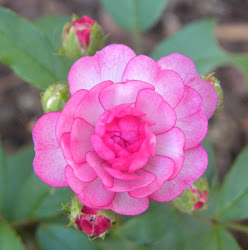 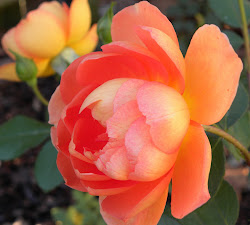 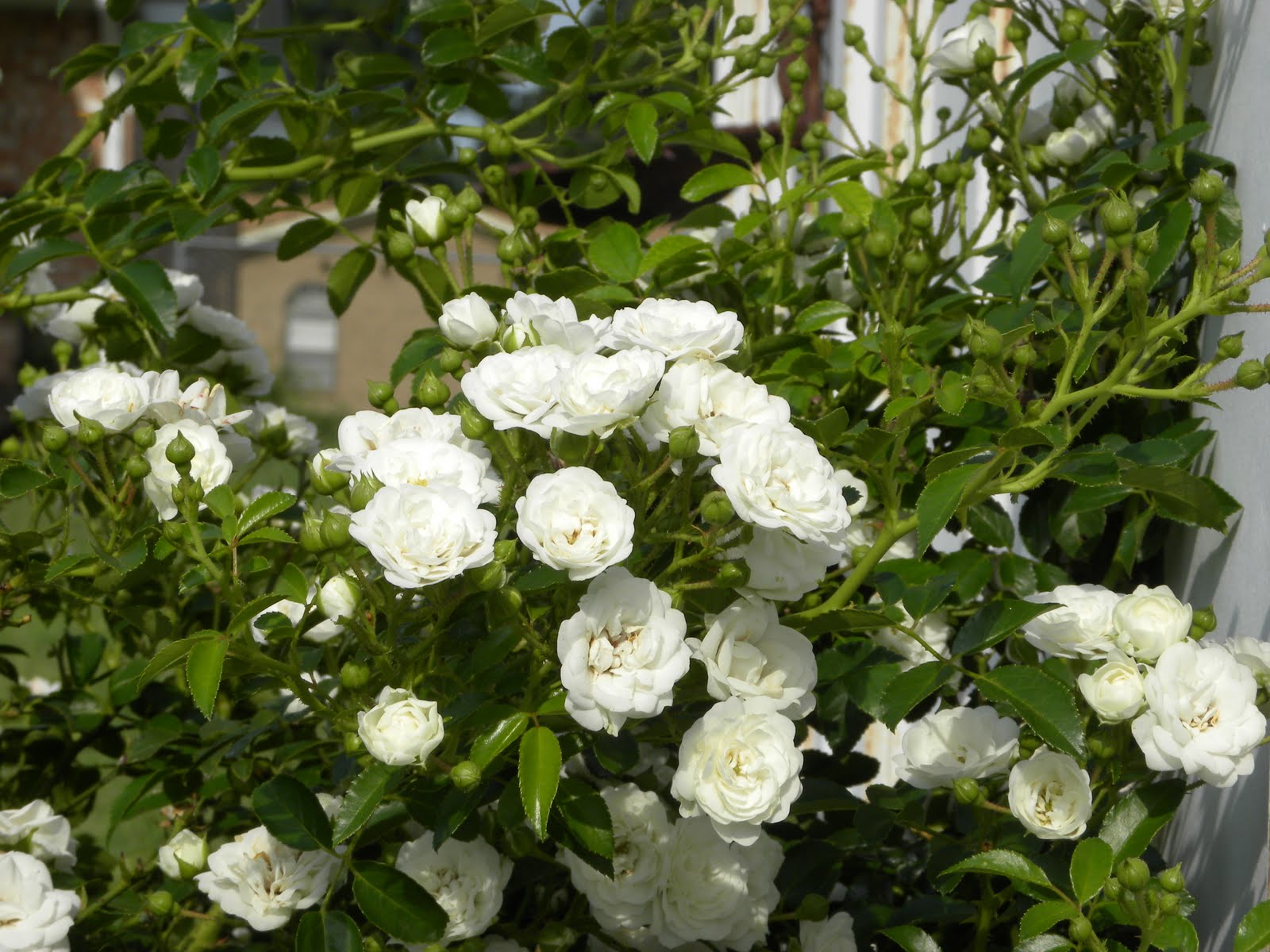 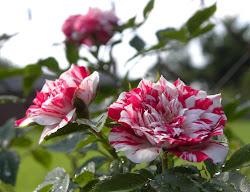 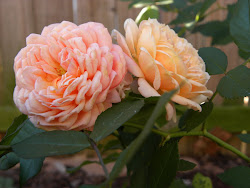 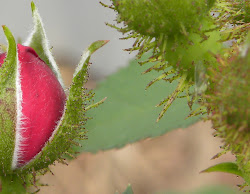 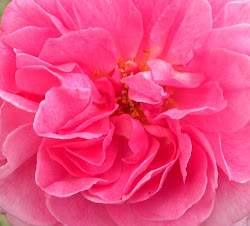 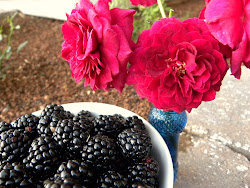 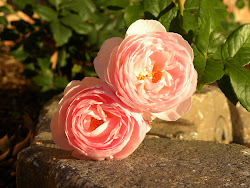